Today I have a layout to share with you that I created a wile ago now.  This layout just kinda fell into place without much effort.  Sometimes that just happens.  More often than not it doesn't lol! 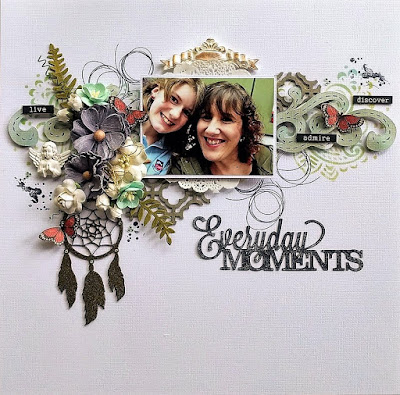 It's a bit of a "bitsa" layout were I have used lots of different bits and pieces and just kind of coordinated it myself.

I started using a pretty stencil with my distress inks.  Then I had a super cool flourish that I had cut on my cameo so I coloured that and added some pen marks.

From there I had a new stamp I was itching to use.  It's the one that looks like string so I stamped that and them moved onto embellishing my page.  I used a couple of chippy pieces I had left over from previous layouts.  Added my flowers and the sentiment I cut from my cameo.

It felt really good to just start from scratch with no collection as such as a starting point.  Just some bits and pieces laying around on my desk.

Thanks for stopping by.

Joey
I am a happily married mum to 3 children, we live in Perth Western Australia. Welcome to my happy place. A place to share and inspire my love of paper craft with like minded creatives. Thanks for stopping by!